The South Essex Sewerage District was established in 1925 to build, maintain and operate a sewerage system to collect, convey, treat and dispose of residential, commercial and industrial wastewater. The District currently serves approximately 180,000 people and businesses located in the geographical area that includes Beverly, Danvers, Marblehead, Peabody, Salem, a portion of the Town of Middleton, and a portion of the Town of Wenham. The District does not directly bill individual users. The District annually assesses its costs to the entities that are located within the District based on their use of District facilities as measured by wastewater flow in Millions of Gallons, and charging each community based on the costs of processing that flow. 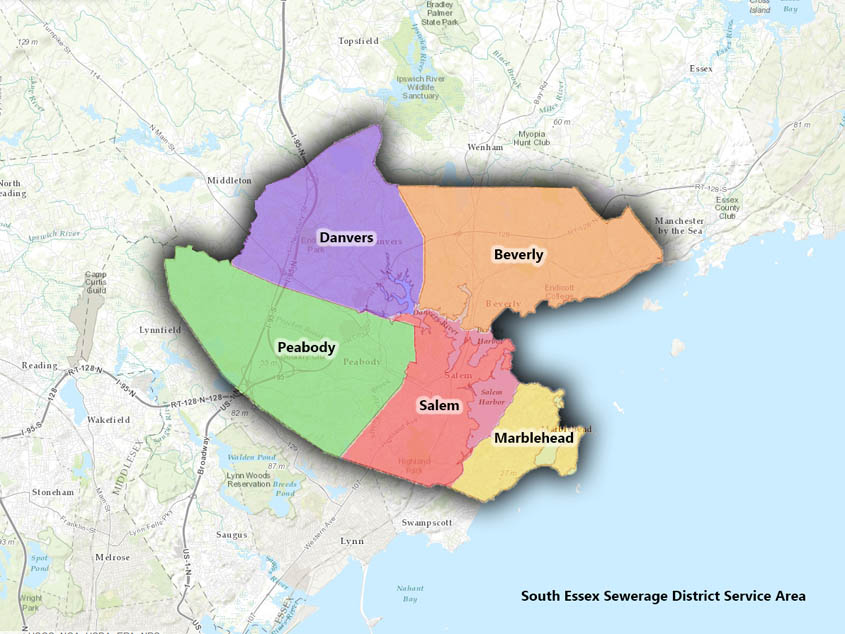 The entire flow at the treatment plant is covered – meaning wastewater is not exposed in open tanks – in order to control odors. SESD effluent water quality is excellent and meets or exceeds the required permit values. Plant effluent is discharged through an ocean outfall into Salem Sound.

The Peabody/Salem Pump Station is also equipped with mechanically-cleaned bar screens which automatically remove any sticks, rags, and other large debris in the wastewater.
(Fig. 2).

The screened wastewater then joins the gravity interceptor flow and is directed into aerated grit tanks for grit removal (Fig. 3). The settled grit is removed for disposal at a landfill.


After passing through the aerated grit tanks, the wastewater flows through pipes and then enters the rectangular primary settling tanks where some of the solid material in the wastewater is removed (Fig. 4).

The settled wastewater then flows into the rectangular high-purity oxygen reactors (Fig. 5).

The high-purity oxygen generation system supplies oxygen to the reactors by stripping nitrogen from compressed air to concentrate the oxygen. Alternately supplemental liquid oxygen can be added. The reactors use biological organisms in the wastewater and combine it with activated sludge to create mixed liquor. The biological solids in the mixed liquor consume the organic matter in the wastewater, breaking it down to carbon dioxide and water.

A portion of the solids – called return-activated sludge – is removed, and the flow is pumped back to the high-purity oxygen reactors.

The remaining solids – referred to as waste-activated sludge – are collected and pumped to the operations building for further processing.

Then, de-chlorination occurs through adding sodium bisulfite to reduce the residual chlorine as it flows out of the chlorine contact tanks. This protects sensitive aquatic species, prevents algae blooms, and other environmental hazards. The treated effluent is pumped by one or more effluent pumps to the outfall diffuser in Salem Sound (Fig. 8).

The biosolids management at the treatment plant takes waste-activated secondary sludge and thickens it with gravity belt thickeners (Fig. 9) and blends it with primary and secondary solids (Fig. 10).

Solids are stored prior to processing with belt filter presses for further de-watering (Fig. 11). De-watered biosolids are loaded and trucked to landfill(s), composting facilities, or for incineration.

Go to top of About Us page